This lively duo combines harp, mandolin, and guitar with soaring vocals.  Ellen Tepper developed an interest in early harp music when growing up in Vienna, Austria.  The Clancy Brothers recording being one of the few English speaking records in the house. Ellen continued to study early Irish harpers like Ruaidhrí Dall Ó Catháin.  She would eventually meet Treasa Ní Chatháin or Terry Kane at an Irish session in Philadelphia.  Terry was immersed in her family's Irish culture: dancing, playing and singing. After moving to the Philadelphia area she was able to take Irish language classes from Deirdre McFarland and from native Irish speakers who had immigrated from Co. Donegal, Dún na nGall. Terry has continued her studies for 20 years, including several trips to Ireland to collect songs and take Irish language and singing courses.

This duo plays many styles of Celtic music from ancient tunes on the Irish wire-strung harp and Gaelic sean nós songs to lively jigs and reels on the Celtic harp or contemporary Irish songs.  Most often they perform with the Celtic harp as it is more stable in varying temperatures.

Both Ellen and Terry hold degrees in music and are full-time musicians available for events during the weekday and weekends. The Jameson Sisters are in demand for Celtic weddings, festivals and private parties.  For more chromatic styles of music Ellen also plays the classical pedal harp.

Other styles of music they offer are: 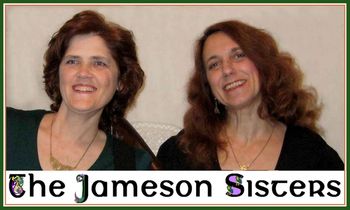